Nestled along a stretch of spectacular scenic highway snaking its way through the twists and turns of the Lake Michigan shoreline is beautiful "Downtown Good Hart". In addition to its status as a thriving resort area, Good Hart also has the privilege of a history rich in Native American lore and local legend. 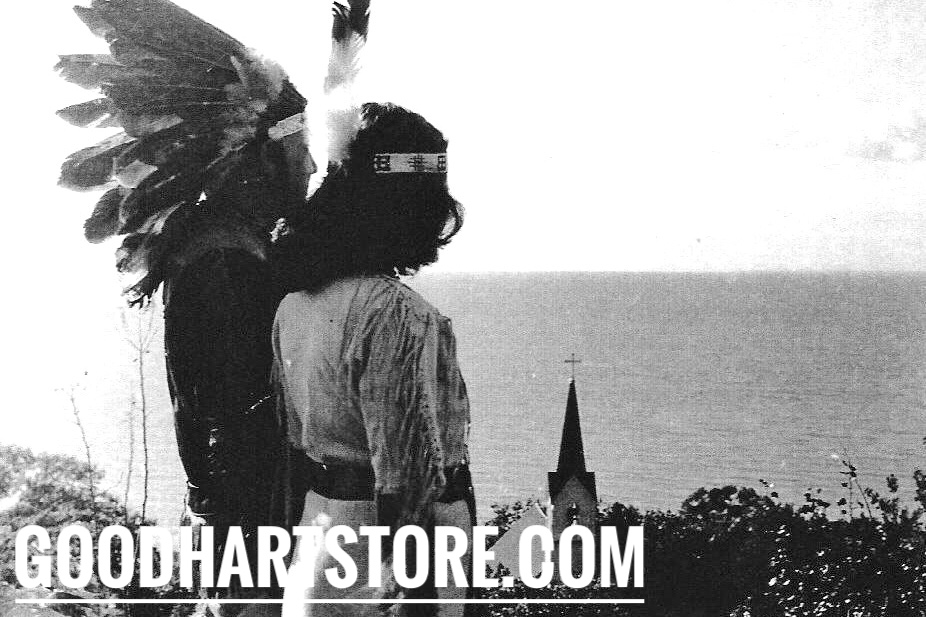 The area of land following the winding bluffs overlooking Lake Michigan between Harbor Springs and Cross Village has been called by many names throughout the years.

Originally Native Americans knew it as L’Arbor Croche, meaning “crooked tree”.  The name derived from an enormous tree with a crooked top reported to be just west of the foot of the hill on Lamkin Road in Good Hart. The tree was used as a landmark to those traveling by canoe in the area.  Indian camps were first established all along the Lake Michigan shoreline at various points including Cross Village, Middle Village (Good Hart), Seven Mile Point (seven miles north of Harbor Springs), and Harbor Springs.

When the area now known as Good Hart was singled out, it was called Waw-gaw-naw-Ka-see, meaning “crooked tree” in Ottawa (Odawa). It was also referred to as Opit-awe-ing, meaning halfway for halfway between Harbor Springs and Cross Village. White settlers would later call it “Middle Village” and then “Good Hart”.

Good Hart's permanent naming came to be in 1827, when the subjects at Middle Village were left to their chief’s brother, Kaw-me-no-te-a, which means “good heart” in Ottawa. The word was somehow misspelled by the USPS along the way, and the error remains today.

Some of the most beautiful Native decorative pieces and artwork came from the area’s first residents.

Straw and sweet grass baskets, beaded medallions, quill boxes, and birch bark baskets remain treasured items that are no longer as easy to come by. Agnes Shenanaquet, an Ottawa resident of Good Hart was known nationally for her spectacular pine quill boxes.

In 1981 Mrs. Shenanaquet received the Triple A rating from the Smithsonian Institution for her quill basket work at the 15th Annual Festival of American Folklore in Washington, D.C.

Living without electricity well into her late 60’s, she would make two each week and sell them for $40 to local traders. Quill boxes today can cost upwards of $1000 for the intricate work done commonly in days gone by.  Mrs. Shenanaquet died the year after her visit to Washington; her boxes and baskets and similar pieces remain treasured pieces of art throughout the world. 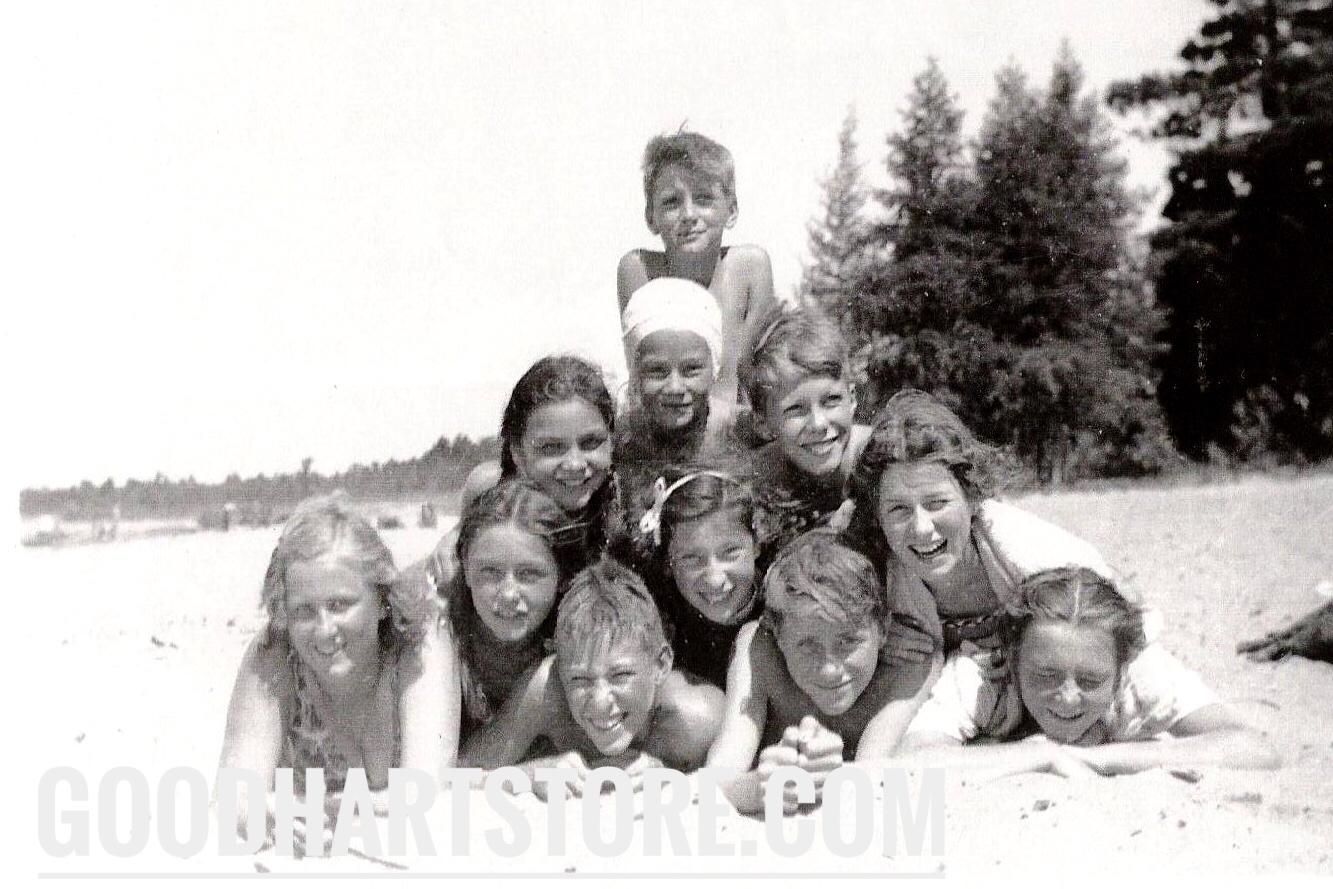 Through additional means of transportation, the early 1900’s allowed Good Hart to become a prominent resort area. Nearby Harbor Springs became a summer playground for the rich, drawing seasonal residents from places like Detroit, Chicago, Buffalo, and St. Louis. In Good Hart, lakefront and bluffside resorts began to emerge as a stable means of income for their proprietors.

One notable resort was the Lamkin Lakeshore Lodge located at the base of Lamkin Hill in Good Hart. The original resort was built in 1912 by Mr. And Mrs. Lowell Lamkin and housed a summer hotel, rental cottages, general store, and post office where both husband and wife served at postmaster. The store was also home to the first school for Native Americans located in Good Hart. A post-WWII gas explosion destroyed the entire original structure, but left the resort cottages and dining house in tact.

Another successful resort offering visitors the peace and tranquility of Northern Michigan was the Krude Kraft Lodge, which is still in existence as a private rental home just 2 miles north of Good Hart along Lake Shore Drive. The property was originally developed by the Bliss family, and was operated by Chauncey P. Bliss and his wife, Mrs. May C. Bliss. Mr. Bliss was a local legend in development and was responsible for creating the famed Bliss Log Home style of cottage construction.

The Tunnel of Trees 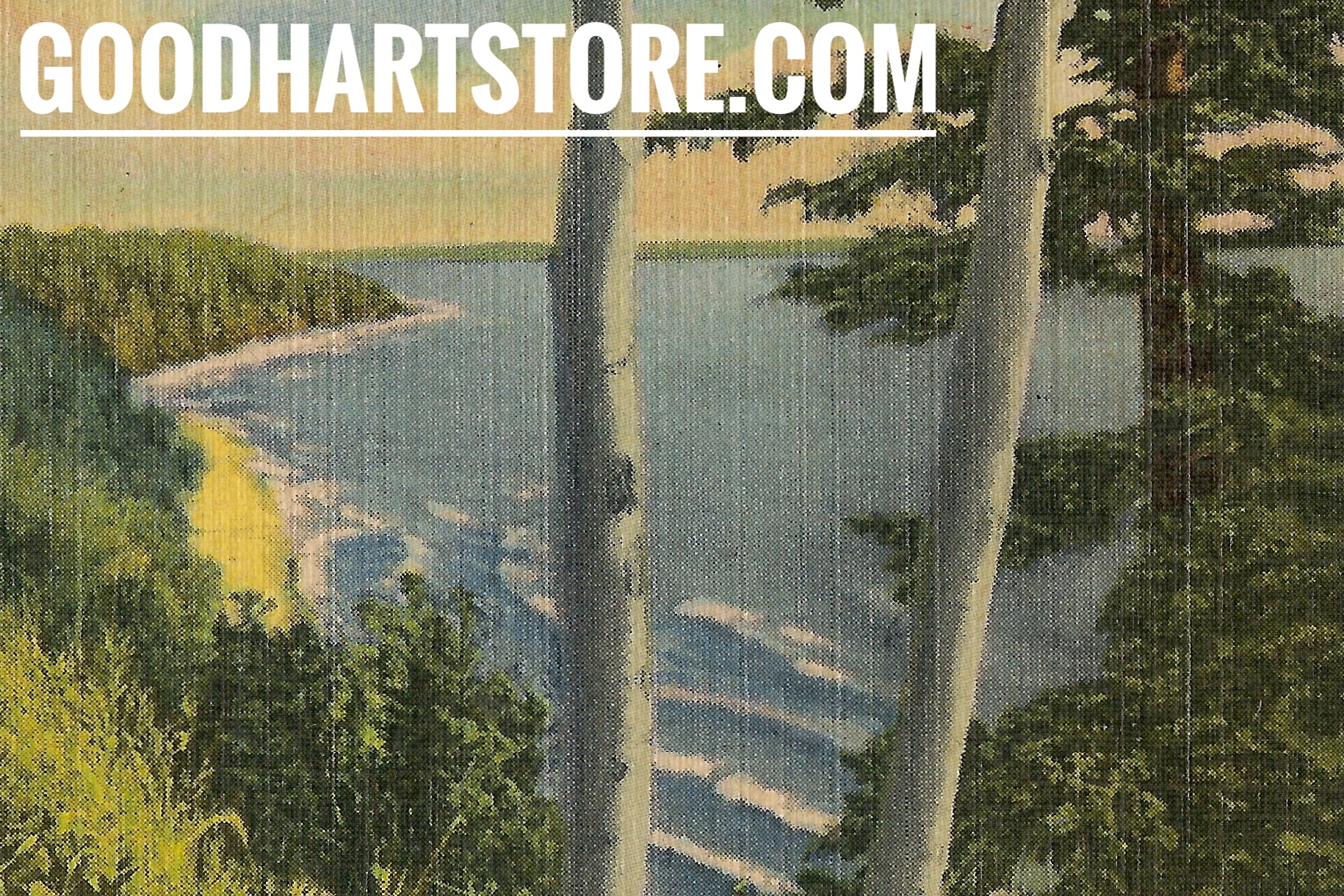 The area of Lake Shore Drive (M-119) between Harbor Springs and Cross Village is appropriately deemed, the “Tunnel of Trees” due to the dense shadowy woods tipping the high bluffs along the shores of Lake Michigan. The Tunnel of Trees section of M-119 is one of the narrowist state highways in the nation at 18 feet wide and with no centerline.  Designated M-131 in 1926, the route was changed to M-119 in 1979.  The M-119 Tunnel of Trees Scenic Heritage Route was designated in 2003 and is now considered a Pure Michigan Byway. Known for its winding curves, The Discovery Channel named the roadway as one of the "Top 10 Motorcycle Rides in North America".  No matter what season, the Tunnel of Trees offers visitors an unparalleled view of Lake Michigan and occasionally Beaver Island, Isle Aux Galets, and even Waugochance Point.

Traveling along Lake Shore Drive (M-119) through the “Tunnel of Trees” from Harbor Springs north to Cross Village, visitors will enjoy historical signs marking points of interest such as Devil’s Elbow and The Old Council Tree. The signs were originally erected in 1955 through the efforts of resident Chauncey Bliss of Good Hart and the Harbor Springs Chamber of Commerce. Through community efforts after the Millennium, the signs were restored and now offer brief history lessons to visitors in traveling the roads of the area once called L’Arbor Croche.

Approximately 4 miles north of Good Hart, travelers will see the location of The Old Council Tree, where famous tribal councils were held. One of the most legendary involved a meeting between Menominee, Chippewa, and Ottawa tribes after the massacre at near-by Fort Michilimackinac in July of 1763. The purpose of that gathering was to discuss further moves against the British.

One of the most infamous historical markers explains the hairpin turn on Lake Shore Drive just south of Good Hart known to most as “Devil’s Elbow”. Indian legend states that Devil’s Elbow marks the location where the devil scooped out a giant hollow after Native Americans suffered a rampant plague. The original sign explained the eerie history:

It has been said that former residents could hear “voices and sounds” coming from the ravine after dark.  The current marker offers a less chilling message. 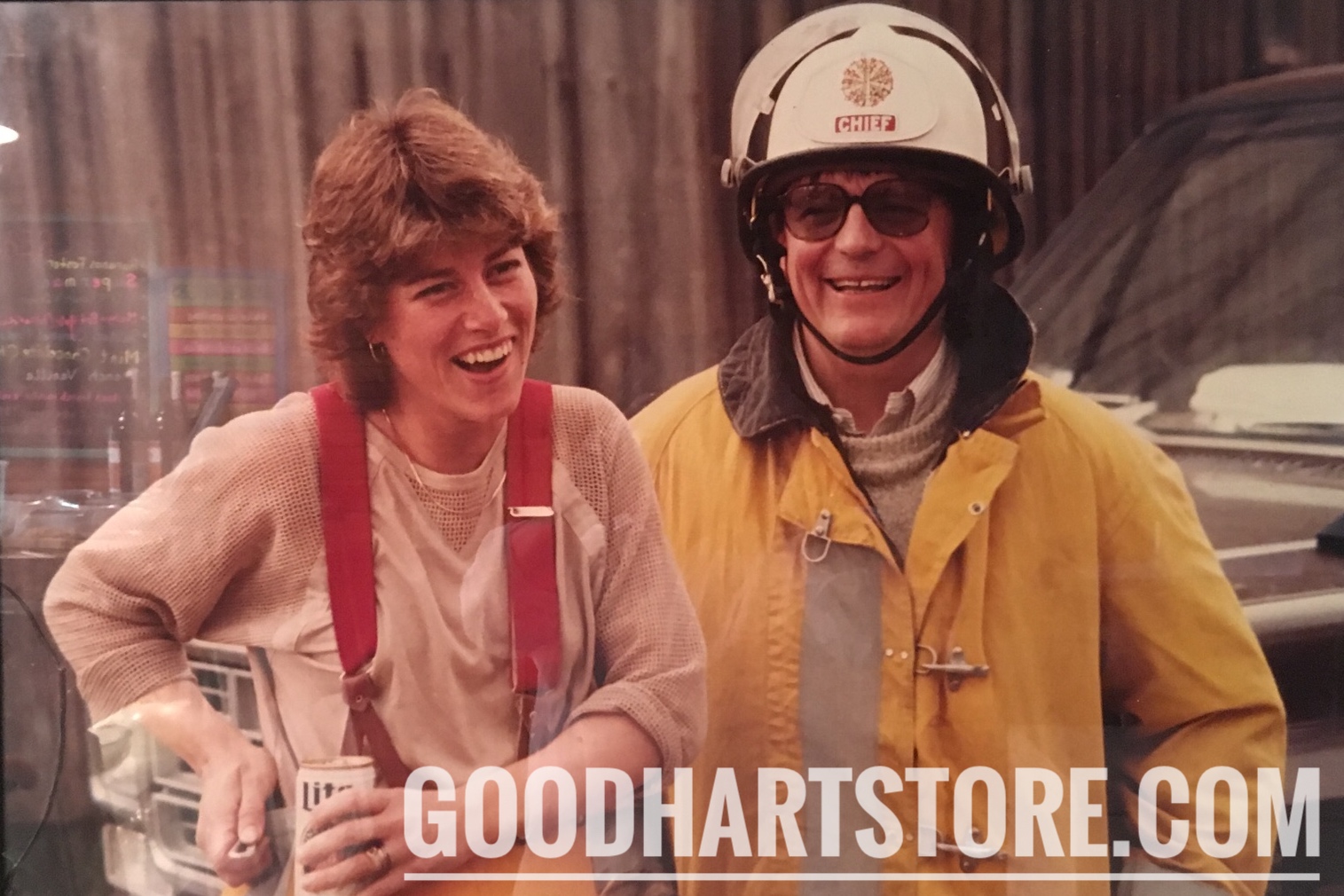 One of the most heroic and substantial acts of community development in Good Hart involved the establishment of the Readmond-Friendship Volunteer Fire Department (R.F.C. Fire-Rescue).

A committee of residents in 1979 banded together to begin a mission offering emergency fire and medical service to the residents of Good Hart and Cross Village. Through much volunteer work and hours of individual service, a team of seven fire fighters was assembled in March of 1980 with the assistance of fund-raisers, individual donations, and corporate donations of equipment. Former resident Randel (Richner) Russell, a female fire fighter and registered nurse outfitted a donated 1974 SUV with necessary medical supplies and the area’s First Response Unit was born.

The current operation includes over thirty volunteer firefighters and seven EMTs and provides a greatly appreciated service to the residents and visitors of the area. 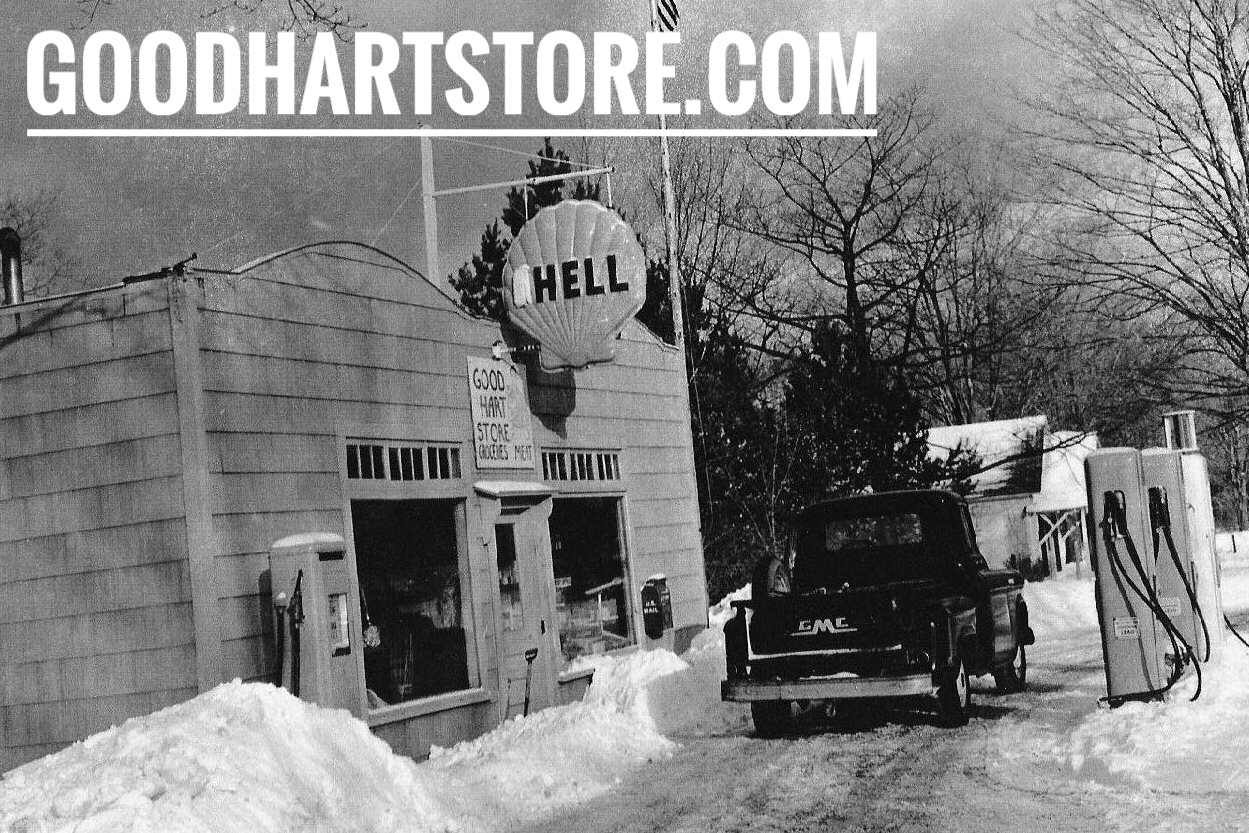 Our tiny red store in “downtown” Good Hart has a history all its own. The current structure was built by resident Cliff Powers in 1934 and operated as a general grocer, butcher, and gas station until 1971 when Powers sold the business to current owner Carolyn (Woods) Sutherland of Huntington Woods, who currently operates the grocery, bakery, deli, and post office with husband Jim Sutherland. Although a post office was established at Good Hart in 1874, the current location was not used by the postal service until 1945 when Mr. Powers became postmaster.

Many original features of the store remain intact such as the tinted front windows, the glass-front counter bins, the 1901 National Cash Register (with warranty, albeit expired), and the carved oak “cooling case” which visitors probably don’t realize was in fact just that, a cooling case, which was installed before electricity was available in the area.

Today travelers along the Tunnel of Trees can’t help but notice the quaint general store situated steps from the scenic roadway nestled between the signs marking the area of Good Hart. Visitors will enjoy homemade baked goods, world famous pot pies, fresh jams and preserves, a delicious selection of prepared foods, and a dizzying assortment of the area’s finest Good Hart branded apparel and gift items.

2021 marked Carolyn Sutherland's 50th year of ownership at the store!  Please join the celebration by sending congratulatory messages, joining our email list for upcoming mechandise specials, and invitations to anniversary events!  It's been a fabulous fifty years here in Downtown Good Hart and we're looking forward to the next fifty!

Carolyn Sutherland has lead the Graham Real Estate branch office housed in the Good Hart General Store since the early 1970's. Her expertise has derived from over forty years’ experience in sales and rentals throughout northern Michigan.  Visit grahamgoodhart.com to learn more on visiting or becoming our neighbor.

Visitors passing the green state highway signs, noting the beginning of this unincorporated, fairy-tale spot will now see the Good Hart of today. “Downtown” consists of the general store, Primitive Images (rustic and local décor), and A Studio, a seasonal boutique offering gift items and accessories.  The only current industry in Good Hart is tourism and we hope you will soon experience it.

For additional information on the history of our area, please visit Graham Real Estate Good Hart. 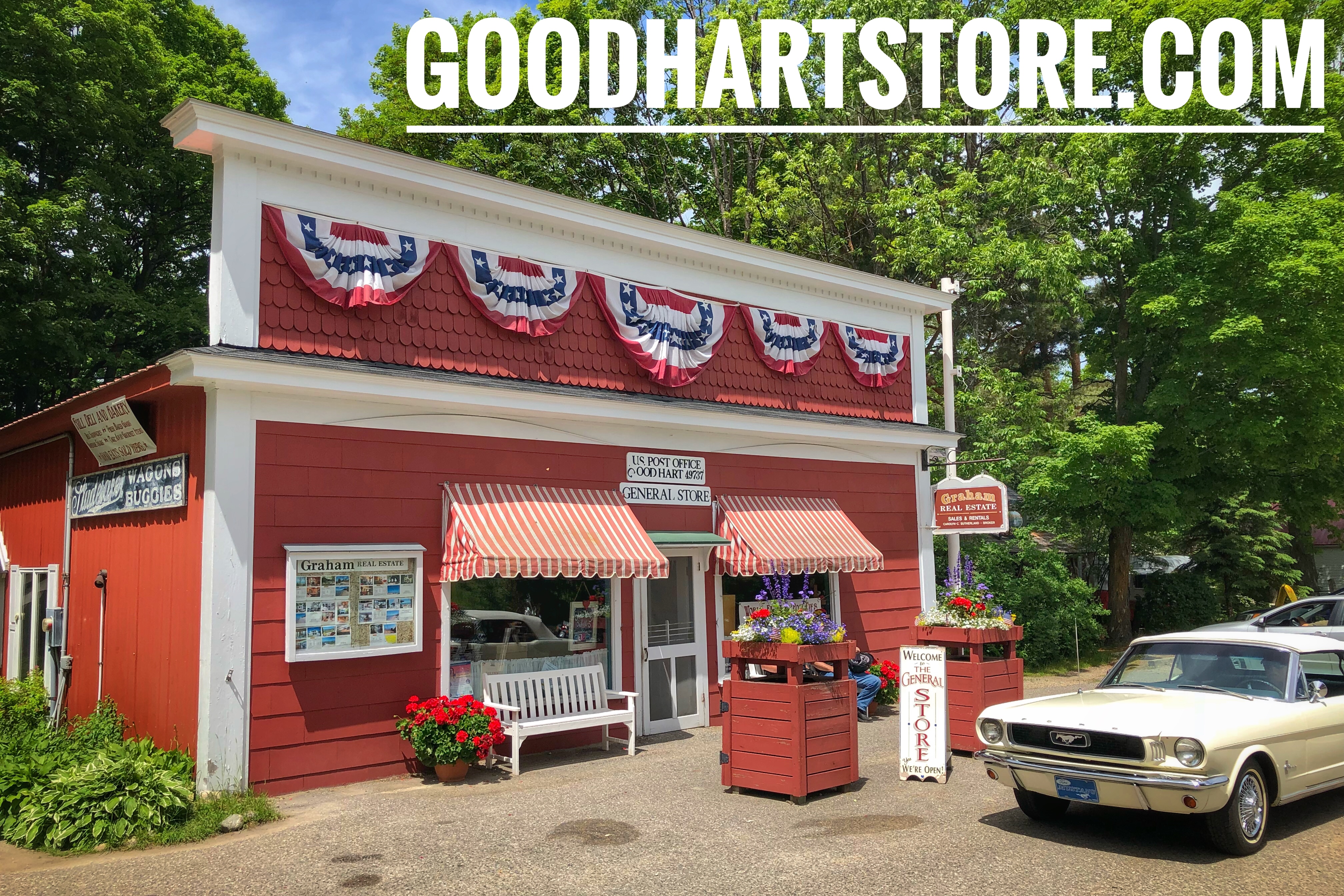