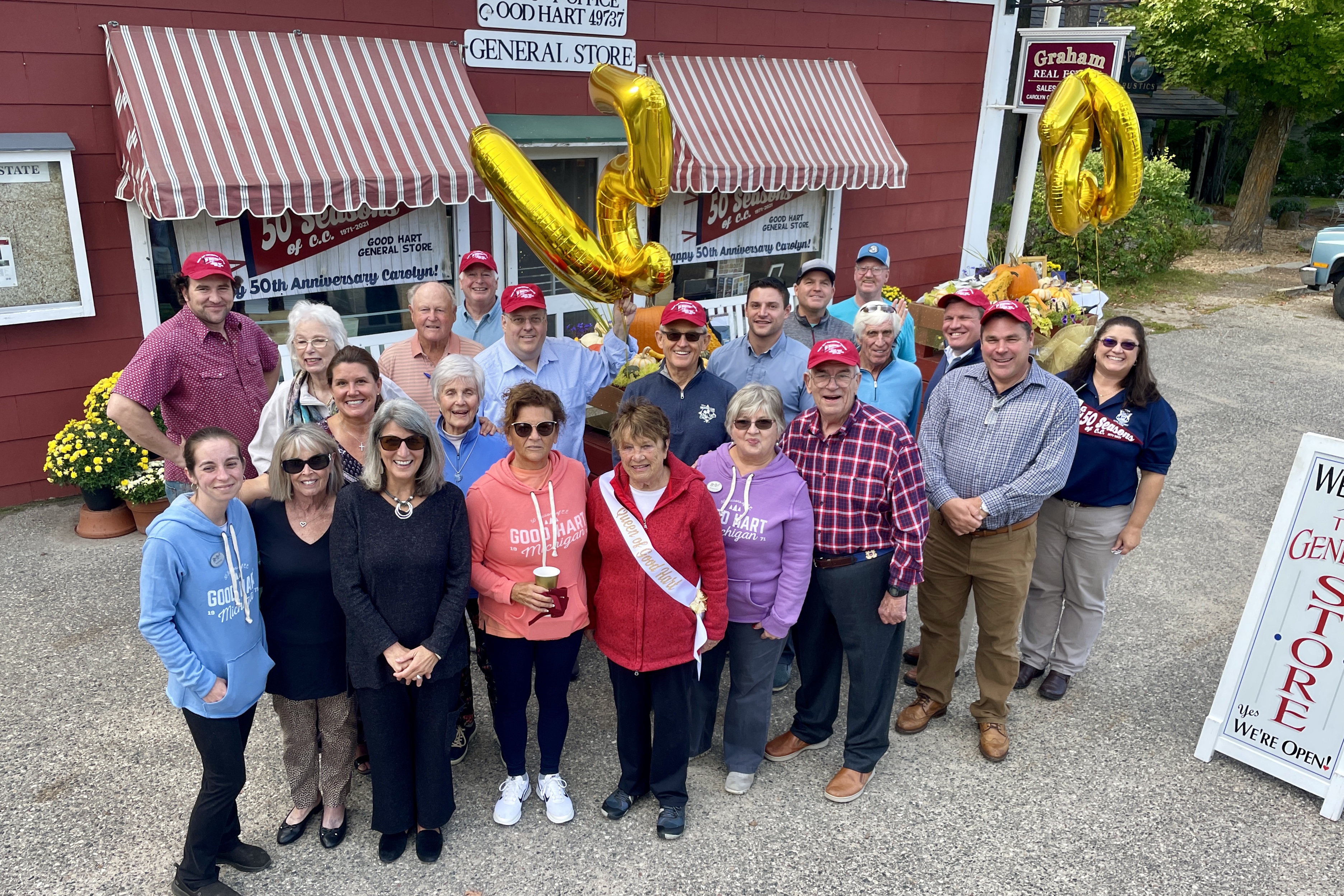 On Monday, September 27, Carolyn Sutherland was recognized by both the State of Michigan and the U.S. House of Representatives with dual tributes celebrating her 50th year operating the Good Hart General Store.  The event kicks off an entire year of celebration including upcoming sales, limited edition merchandise, special events, and of course a big, big party come spring of 2022.

We'd like to thank the offices of Senator Wayne Schmidt and Representative John Damoose as well as Congressman Jack Bergman for their contributions.  It was a special day in Downtown Good Hart with close friends and neighbors who make Good Hart what it is!!  It's still "Gooder in Good Hart", after all this time.

Let it be known, that this tribute is to honor and recognize the considerable contributions of Carolyn Sutherland as owner and operator of the historic Good Hart General Store for the past 50 years.  Her 50th year as proprietor falls during an infamous and notable time in our history, particularly for small business when so many face unprecedented hardship.  Celebrating this critical milestone with a thriving business amongst global economic turmoil is to be commended.

Originally purchased by her father, Ed Crowle, in 1971, Carolyn has continually run the business ever since, operating year round.  A U.S. Post Office since opening in 1934, the Good Hart General Store continues to serve postal customers with Carolyn listed as the contract officer for the 49737 station.

As a post office, real estate sales and rental operation, grocer, deli and bakery, and general merchandise shop, the Good Hart General Store is cherished by local residents, as well as visitors from around the world.  The store serves as a treasured stop along Michigan’s famed Tunnel of Trees Pure Michigan Byway.  Carolyn’s husband James has contributed greatly over the past 30+ years after retiring as a Commander with the United States Coast Guard in 1985.  Along with James, her store manager Shannan, and a capable team, the store continues to grow both in popularity and success.  An e-commerce website, launched in 2018, has propelled the store into the business of online sales, seamlessly shipping their world famous pot pies, cookies, and branded merchandise around the globe.

Carolyn’s contributions to the greater Good Hart community are also to be recognized including but not limited to her critical role in the development of the area’s volunteer fire and rescue department, establishment of the area's last remaining Odawa home as a recognized non-profit operation, securing the St. Ignatius public beach for future enjoyment, and more.  Her tireless hours dedicated to community service have been invaluable.

IN SPECIAL TRIBUTE, Therefore, This Document is signed and dedicated to honor the Good Hart General Store, its owner Carolyn Sutherland, her family, employees, the residents of Good Hart, and all customers as they collectively celebrate this notable milestone in its history.  We commend Carolyn for her dedication to small business, the store's operation, and the community of Good Hart at large as she celebrates her 50th year in business.

JOHN DAMOOSE, State Representative
The One Hundred and Seventh District

MADAM SPEAKER, It is my honor to recognize the 50th Anniversary of the Good Hart General Store of Emmet County, Michigan.  Through its five decades of service and steadfast devotion to its community, the General Store has become a local landmark and an indispensable part of Michigan's First District.

The General Store was first constructed in 1934 by local resident, Cliff Powers.  Along with serving as a local Postmaster, Mr. Powers used his store as a grocer and gas station to bring needed supplies to his community.  He would continue his local business for almost 40 years until selling it to Carolyn Sutherland in 1971.  She has successfully preserved the history and significance of the General Store ever since.  While also managing the store, Ms. Sutherland leads Graham Real Estate in Good Hart where she has continuously worked to better the lives of her community and the State of Michigan.

MADAM SPEAKER, It's my honor to recognize the Good Hart General Store for fifty years of success and service to Northern Michigan.  Michiganders can take great pride in knowing the First District is home to such dedicated citizens that help preserve our most treasured businesses and landmarks.  On behalf of my constituents, I wish them all the best in their future endeavors.

Join us in congratulating Carolyn on her fiftieth year of ownership.  Email messages to maggie@goodhartstore.com and she'll forward along to the big cheese, or in our case, the big C.  Thanks for helping her celebrating this criticl milestone! 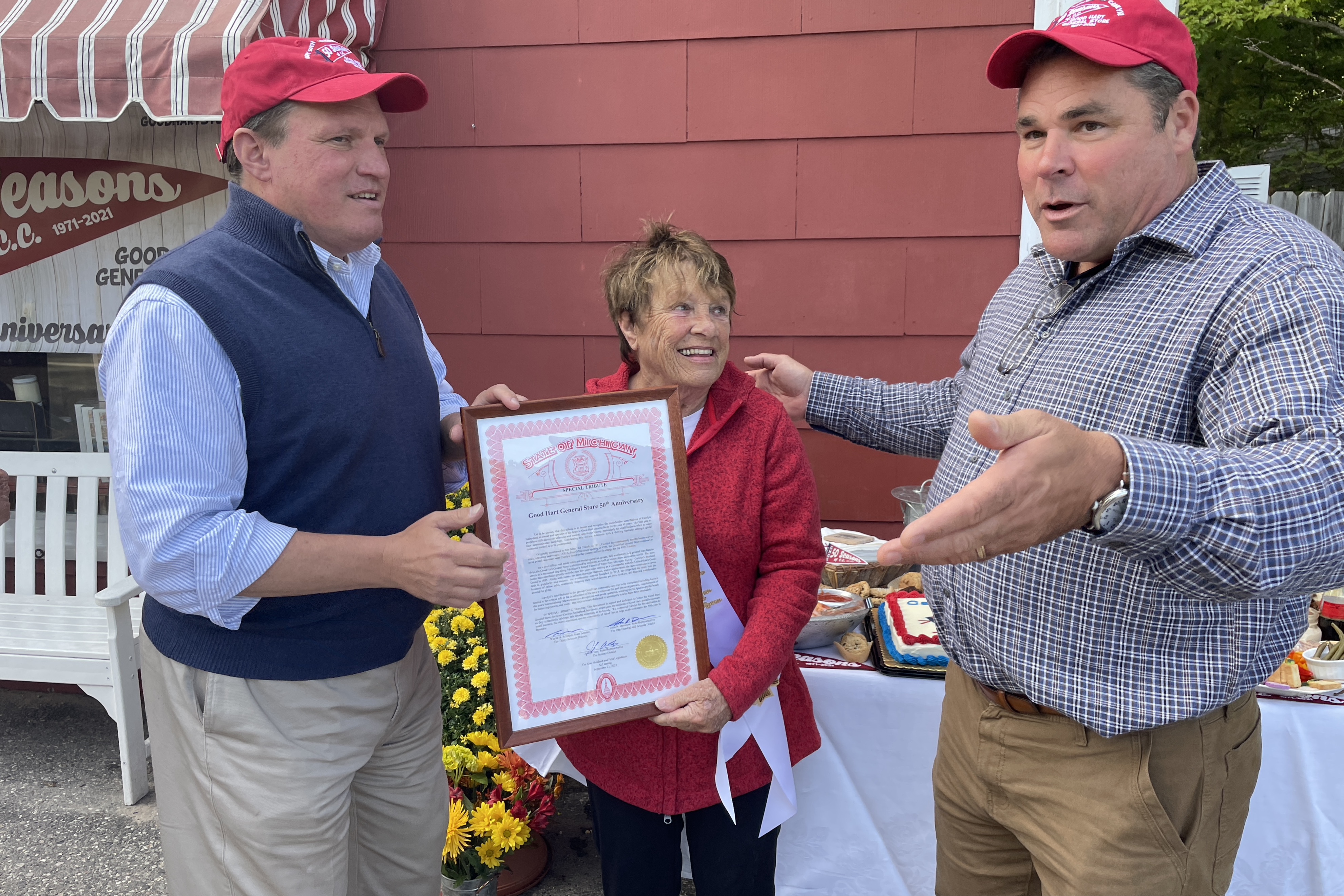